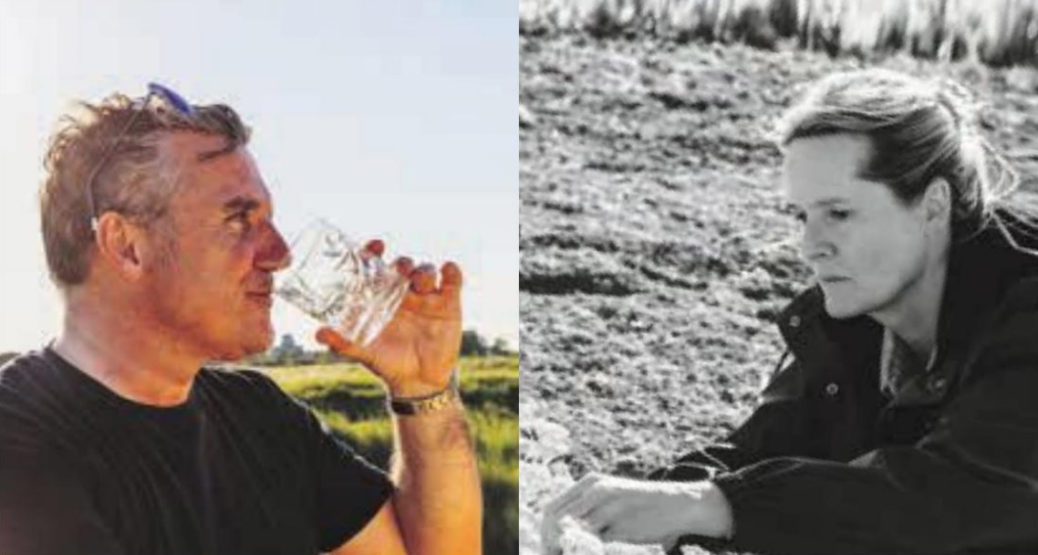 How to create a remarkable gin ?

Within a very fashionable category of spirits, Christophe and Cecile Amigorena stand out with Melifera, a local organic and sustainable gin. who can top that?

They collect immortelle flowers from their own fields to make the gin, they share drinks with terrace and restaurants owners who’ve become Melifera lovers themselves. Melifera fans are now praising their beverage… At first glance, the life of this start-upper couple, seems like an economic fairy tale. How did Christophe and Cecile Amigorena manage to get where they are in barely eighteen months? Coming from the norther part of France, Cecile is not only an expert in marketing and communication, but also a painter.

Christophe, a bit more senior (vintage 1966), half Basque, half Charentais, grew up in Cognac. He could be labeled as a high-speed enterprise development specialist. Some have met him at L’Occitane, in 2003 when the company started taking off. He quickly took over the leadership of the US branch. From New York, he made the Provençal label’s sales explode. We then hear about him, for his work at Bose ( the American sound giant), before he left for Devialet, a startup where he was one of the key players in the global launch of the Phantom speakers, which boosted the turnover of the company. In his early years, he was one of the spearheads of the Häagen Dazs ice cream company. It is there that he met Cecile. “Almost every company and business leader I’ve worked for is now an investor in our business”, he says.

Both say their new venture was above all, a desire to change lifestyle. “In 2003 we had already decided we wanted to settle in Cognac. We also had a house in the dunes, close from the beach, in the small village of Chaucre, on the island of Oléron. I was consistently doing round trips between Paris to Cognac and decided it could not last”. The time was right. It was now a matter of taking root, of establishing a foothold in Oleron. In December 2019, they filed articles for Melifera, drew 62,000 € from their own funds and got started. “We started in a garage, like Apple,” he even dares, to which his wife smiles.

The base and the soul of a gin, remains its fragrance. The Oleron immortelle, a spicy plant with a scent of hot sand, is the centerpiece of the recipe. It is forbidden collect it from the dunes, the vegetation of which is protected. “We could have obtained it elsewhere, but we decided to plant it.” They then bought a 2-hectare field, a charming piece of Oleron’s countryside, on the edge of the forest. Two hundred and fifty Helichrysum italicum plants, with peppery, minty stems, were planted and harvested and the production was increased for the sake of the company. The landscape architect Jean-Baptiste Lacombe arranged the plot so that it could becomes a place to discover the local flora, a kind of showroom for their product. They then decided to add the junipers to the wild berries, gentian, mugwort and a honey flowers. At the end of the field, they decided to set up beehives as they are campaigning for the reintroduction of the black bee, a more resistant (but a tad more aggressive) bee than the common hybrid. “We are working with the Conservatory of the Black Bee of Oleron (CANO) and we are funding DNA tests to make sure that black bee hives are not being colonized by other species.” Note that the scientific name of the insect, Apis Mellifera, is almost that of their spirit. We now ask ourselves why they didn’t call their gin “Immortelle”. “The name was already taken, and our lawyer advised us against using it. It’s not very compatible with the Evin law,” they regrettably say

The immortelle flowers are harvested by hand, cut with a notch knife. Our two creators went to Corsica to learn about the basics of this backbreaking agricultural work. Once the plant is cut, it is a matter of macerating it in 68-degree alcohol to obtain the desired aromas. Then proceed with the final blend with wheat alcohol from the Chevanceaux distillery (17).

At the top of the rankings for the best gins

When he is not cultivating his flowers, Christophe Amigorena focuses on fundraising. This year, he called on several investors and raised more than € 600,000, before obtaining € 300,000 from the Public Investment Bank. Impressive right? Melifera seems to be on the right track. The design of the bottle is thought through every detail. We find on it the immortelle flowers, a reference to Alienor d’Aquitaine who is said to have adorned her crown of immortelle flowers during her second marriage with Henri Plantagenêt. We also find the lighthouse of Chassiron on the bottle, which marks the northern part of the island. … All of this is well designed and well marketed, qualities buyers appreciate. Melifera quickly found itself at of the charts for the best gins. “It is however not enough to create a good product and a brand, you must know how to distribute it”, reminds Amigorena.

He knows very well that not a week goes by without a new gin peeking its head. He believes the market will saturate and many brands will disappear. Only the best and most distributed will survive. Melifera is available in a good number of businesses in the South-West, and a bit in the South-East of France, at very good Parisian wine merchants. But the entrepreneurs want to move up a gear and target the United Kingdom, the North American market, Japan … The couple envy the firepower of major groups in the sector and do not rule out mergers.

In the meantime, the Amigorenas are addressing new ideas – a second gin should see the light of day – and are increasing collaborations. Their cocktail made with gin, angelica liqueur, salicornia and champagne, developed by Christopher Coutanceau’s restaurant in La Rochelle, is very successful. The Amigorenas wanted to change their life and it’s a success to say the least. But they haven’t changed their pace. He remains connected to Waze and drives tens of thousands of kilometers to present his spirit. She, more accustomed to meeting at Gafa offices in Palo Alto and elsewhere, has to sort out the smallest details of how the family business operates. They have an insane amount of energy and here it is rather appropriate to say “gin makes you tonic”